This set of stainless steel coolant pipes replaces the weak factory plastic units that are prone to failures.

A known weakness of the GT1 engine is that the coolant pipes (6-8 per engine) come unstuck from various housings and cause complete catastrophic coolant failures.

A lesser known issue involves the plastic coolant elbow pipes that run to the two oil coolers (aka heat exchangers). These pipes are molded plastic and have a very thin wall where the pipe connects to the engine with an O-ring seal. The problem is that over time and mileage, the thin plastic wall will break down at the o-ring slot (its weakest and thinnest point) causing a crack to appear. Eventually the whole engine will need to be removed in order to replace a cheap plastic tube. Both of these issues have been observed on the 997 GT3 and GT3RS as well.

After a customer spent nearly $2500 replacing this small part due to a coolant leak, costing him two track days and several weeks of downtime, we decided that a permanent solution was necessary and made these stainless steel pipes with CNC billet ends. We believe these should be used in place of the OEM part to avoid the aforementioned costs involved in replacing these leaky tubes ever again.

A razor blade showing where the stock piece fails. The car had approximately 40,000 miles of use in a mild climate:

The engine must be removed in order to install these so we recommend performing the "coolant fix" at the same time or replacing these whenever an engine rebuild is in progress.

Price shown is for the complete set of three pieces. O-rings are included and pre-installed. Made in California from stainless steel. 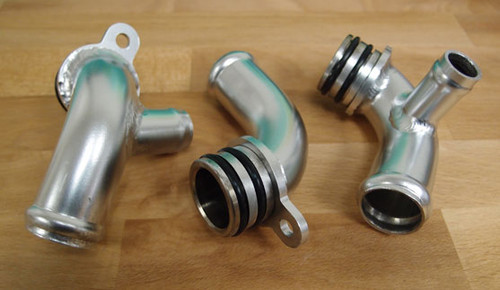